How To Prevent Flooding

As heavy rain continues to contribute to the devastating flooding in Cumbria, there have once again been calls – notably from the environmentalist George Monbiot – for the reforestation of our uplands, to help tackle rural flooding. The government has stated that it is funding the planting of 11m trees over the next five years to this end. It has also been suggested that trees could help reduce the number and severity of flash floods in cities, such as those that devastated Hull in June 2007.

To determine whether the humble tree really can provide such robust defenses, we first need to understand the role they play in soaking up excess rainwater. All floods, whether fluvial (when rivers burst their banks) or pluvial (when rainfall overwhelms drainage systems before it reaches rivers), are caused because the rain cannot soak into the soil fast enough. Instead, it runs rapidly over the surface of the land.

And while climate change is causing bigger and bigger storms, our alterations to the environment – especially to the ground surface – have been one of the major causes of the increased frequency of flooding events in modern times.

Cities offer the most obvious example of how human development is making flooding worse. In urban areas, the ground surface is covered by impermeable buildings and roads, which rapidly divert rainfall into gutters and drains. When these reach capacity, flooding occurs.

Computer modeling of water flows in cities suggests that for every extra 1% of impermeable land that is converted to woodland, a runoff would be reduced by less than 0.5%. So even large-scale urban tree planting would only reduce runoff by a small amount – far lower than the 80% increase in storm size that climate change models predict for the UK. 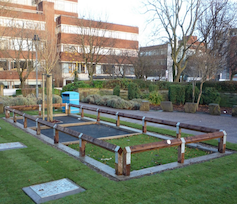 But these estimates assume that trees don’t affect how much water runs into drains from buildings and roads. Recent research we carried out in Manchester has suggested that trees planted on the streets can have a much greater effect than predicted, largely because rainfall can run from pavements into their planting holes.

Trees which are planted as a part of Sustainable Urban Drainage Systems(SUDS) schemes – in which rainfall is deliberately diverted into swales, hollows, and soakaways – could be even more effective. Unfortunately, though SUDS schemes are increasingly popular, little research has been carried out to monitor their effectiveness at reducing runoff.

Rural areas of the UK have also undergone a massive transformation at the hands of humans. Forests, which would have provided natural vegetation cover, have been removed and replaced with arable crops (in the lowlands) or grass pasture (in upland areas such as the Lake District). Both of these types of agricultural land shed much more runoff than forests. Their thin soils are compacted by heavy farm machinery and the hooves of cattle and sheep. This reduces their permeability, making it more difficult for rain to penetrate the soil, while short-cropped grasses and flat fields offer little resistance to the overland flow of the runoff.

Reforesting such areas can have several benefits. For one thing, the tree canopy can intercept some rain, which can then evaporate before it even reaches the ground. But this only reduces the effective rainfall by a few millimeters, and the effect would be negligible in winter when low temperatures reduce evaporation and deciduous trees have shed their leave. 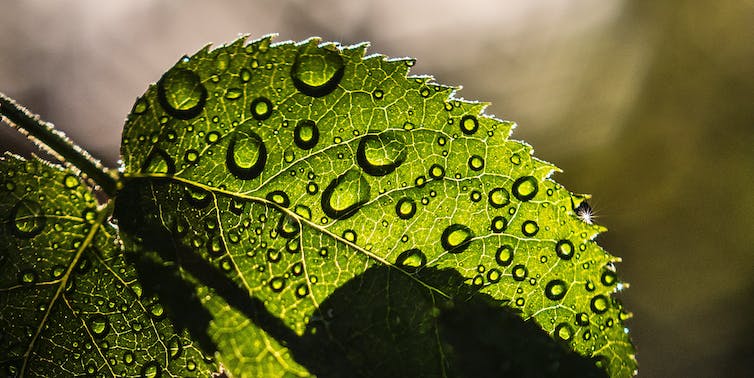 The effects of trees on the soil are much more significant. Fallen tree leaves build up a deeper, humus-rich soil, which is crisscrossed by thick surface roots that intercept the overland flow of rainwater. Meanwhile, sub-surface roots penetrate deep into the soil, drying it out and increasing its permeability. These mechanisms are well-established and seem to point to trees as a possible solution to flooding.

Yet in rural areas, the effectiveness of reforestation in preventing flooding is still uncertain. A recent study at Pontbren, in Wales, showed that planting trees on former pasture can increase the rate at which water infiltrates the soil by a factor of around 70 in just seven years, thereby reducing overland flow. Unfortunately, the planting was done on a relatively small scale, and there was no way of comparing catchments with and without trees, so it was impossible to tell whether these changes had significantly reduced the speed at which water drained into the local streams, the water which would cause fluvial flooding downstream.

Ultimately, we lack the strong research base necessary to accurately quantify the anti-flooding benefits of planting trees: large-scale studies cost money, and scientists have difficulty repeating experiments to confirm their findings because no two catchments are the same. Most studies, therefore, depend on modeling, but even this is unreliable because the models cannot be validated by experiment. There is also a range of other factors, which might be affecting our results, such as soil type, slope, and whether the trees are positioned next to streams and rivers. But based on what we know, it seems unlikely that reforestation would be a total panacea; after all, forested areas still flood.

And so it seems unlikely that reforestation alone would have been able to prevent the current floods in Cumbria. But by finding ways to measure the benefits of trees, we will be able to use them to their full potential, as a part of our engineered flood prevention schemes. By incorporating trees as part of the solution, we could add some green to the concrete jungles in which so many of us live, and transform our countryside into a lush and varied environment.